The Ulju Mountain Culture Awards is awarded to those who have made exceptional contributions to the progress of mountain culture, such as nature, environment, climbing films and literature. The Ulju Mountain Culture Awards was awarded to ‘son of earth’ Rick Ridgeway in 2017, ‘a first professional mountaineer’ Sir. Chris Bonington in 2018, and ‘filmmaker of the 8000s’ Kurt 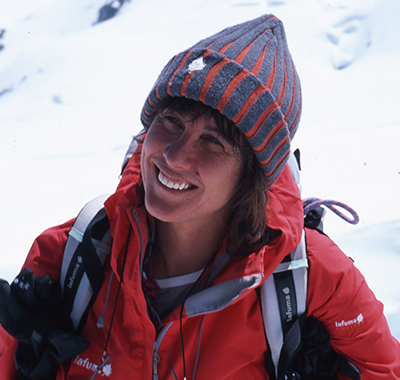 Catherine Destivelle is one of the most established mountaineers across the globe. She became widely recognized in the world stage by demonstrating unrivalled talent in the fields of sports climbing, rock climbing and alpine climbing in the late 1980s and 1990s. In 1990, she became the first woman to climb the fascinating granite monolith Trango Tower in Karakoram. In 1992, she opened a new route in the west pillar of the Dru by herself. In the winter of 1992, she climbed the north face of Eiger, once again by herself, which took her only 17 hours. She also climbed the south west face of Shishapangma (8,027m) and the south face of Annapurna (8,091m) in Himalayas. With faith and passion, Catherine Destivelle broke the social prejudice that women were not able to climb. She helped other women mountaineers make a major step forward by making challenges to the high-risk solo mountaineering. The 'Destivelle Route,' which she cultivated while climbing the Aiguille du Dru in the French Alps for 11 days alone in 1991, is the first rock climbing route that was named after a woman.

In addition to these astonishing establishments, she is continuously making huge contributions to the world mountaineering culture by way of participating in books, movies, speeches and events. She has also received the Piolet d'Or Lifetime Achievement Award in 2020. Becoming the recipient of Ulju Mountain Culture Awards 2020, therefore, will give a breath of fresh air into Korean society while being celebrated in the world community of mountaineers at the same time. Furthermore, her challenging spirit well manifests the slogan of 2020 Ulju Mountain Film Festival, 'One More Step.' The prize of Ulju Mountain Culture Awards 2020 will be given in 2021, during the opening ceremony of the 6th Ulju Mountain Film Festival. Those who visit the festival, will have a chance to meet the world-renowned woman mountaineer Catherine Destivelle in various cultural events including lectures, exhibitions and special meetings.